My coworker was unable to use her season tickets for the September 19th, 2015 K-State football game against Louisiana Tech and asked if we’d like to go. M was out of town that weekend, but we’d wanted E to experience a KSU game this year anyway, so I asked my cousin if she’d like to come with and we headed west to Manhappenin.

I will say that it is always exciting to experience things through your child’s eyes, and this was no exception, but I don’t know that we need to experience it again until she is old enough to sit still longer than 2 minutes. She really liked seeing Willie on the field and would give her full attention and even give him some waves when he was in her eyesight. Other than that, she was pretty restless. The space between the bleacher and the person sitting in front of you is about 1.5 feet, so there is very little wiggle room when she does decide she needs to move around. We spent a lot of the game walking/running around up around the concourse. We did get a quick visit with Aunt G who was working at the merchandise tent. She was so sweet and even bought E a little Willie souvenir of her own.

I definitely owe my cousin, S, a huge thank you. She helped carry E on the long trek from the car, dig snack after snack out of the diaper bag, and helped this preggo lady take care of a 1.5 year old. No way I could have done it without her.

All in all, it was a good time, just not one that I feel like I need to do again anytime soon.Which is okay, because here in about 17 years, E will be attending all of the games herself while she’s attending school out there. 🙂

Oh, and I should probably update with the outcome of the game: K-State looked, well… not great, but after 3 overtimes they ended up winning 39 to 33.

Ready to hit the road! 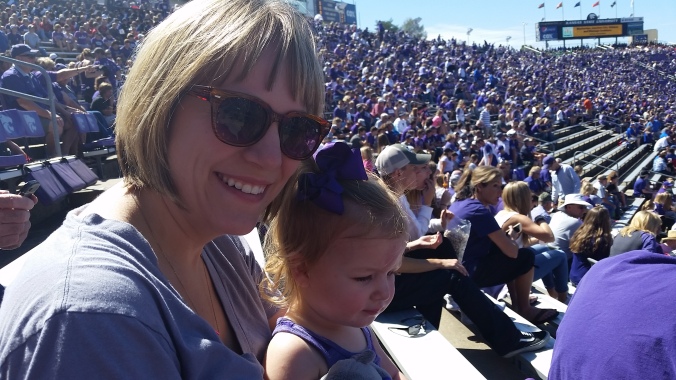 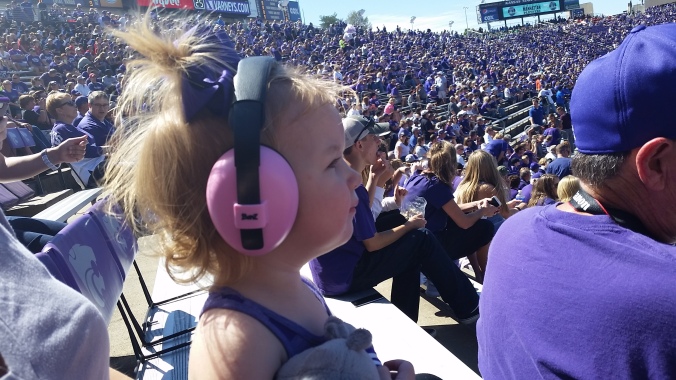 She didn’t leave the headphones on for too long.

You can see her Willie doll that Aunt G gave her.

Hanging out in the gift shop to kill time/hang out in front of the fan/visit Aunt G.

She did enjoy the necklaces we bought. Whether it was putting them on and off or just whipping them around (we had to nip that in the bud).

She refused to look at the camera in any of the shots. 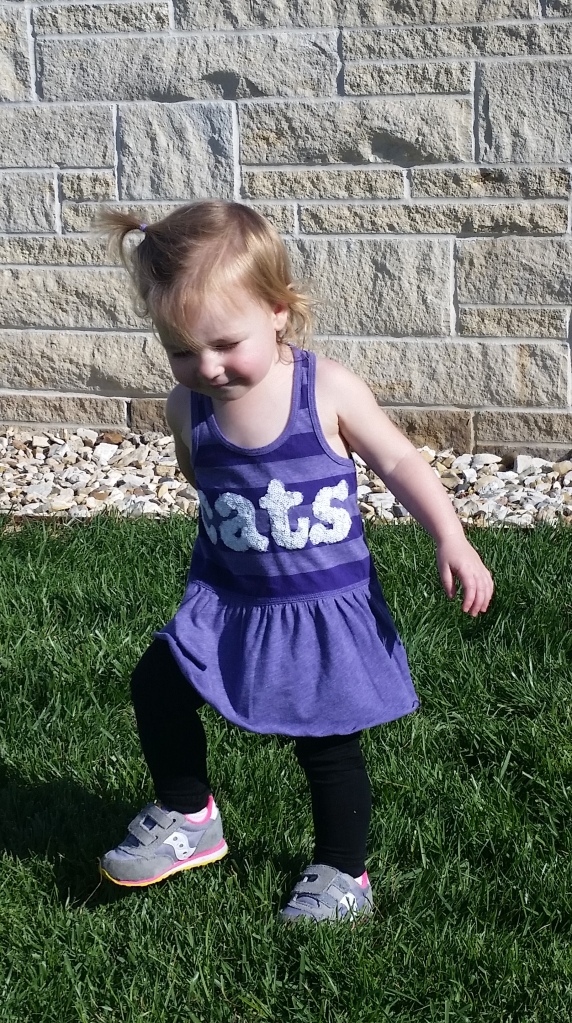 Playing up behind the stands to keep her entertained.