Baby is finally here!! M was thoughtful enough to write out N’s entire birth story when we were still in the hospital to ensure that it was fresh in our minds. So, most of this blog post is from his POV. Prep yourself, this is a long one, folks.

Much like the first pregnancy, L really didn’t want to be induced, but these babies seem to take too dang long. She was having contractions but not very severe most of the preceding week (week of Christmas).  At her appointment with Dr. S on Monday 12/28 they decided the baby was healthy but for everyone’s sanity, probably ready to come. They scheduled her to be induced starting at 7am on Wednesday December 30th.  Ideally Lauren would have liked to give it a couple more days to see if she came naturally as E did, but the hospital didn’t have any availability on 12/31 due to NYE and Friday 1/1 was a holiday and then the weekend, all of which they don’t allow elective inductions, so her other alternative was to wait until Jan 4th.

Last photo of just the three of us. 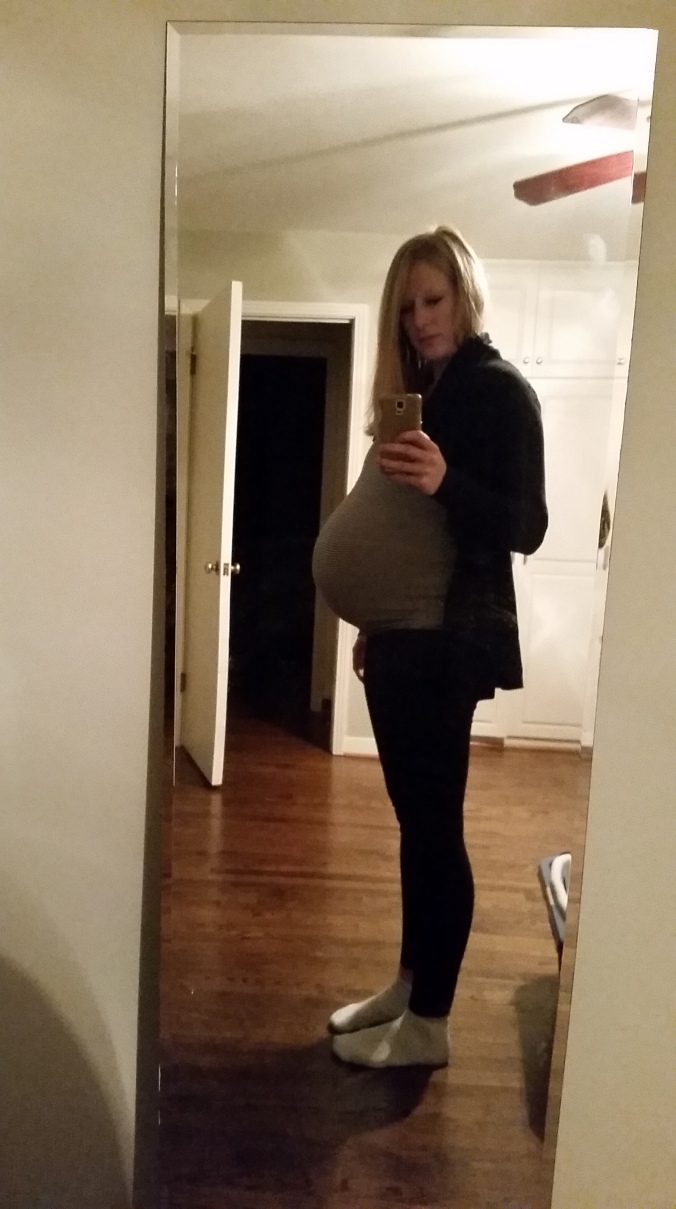 We arrived at the hospital around 6:40am and were admitted slightly after 7am.  Her labor room was on the 2nd floor in room 3207.  They got off to a rough start as one of the first things they attempted was to put in her IV.  They were having trouble getting it in.  The nurses tried on their own 5 times and gave up.  They called in an anesthesiologist named Kelly (a male) and he was finally able to place it on the 6th overall try.  Once he got it in, L quickly said, “That’s it, we’re naming the baby Kelly”.  He responded with “That seems to be a bit unnecessary” in a straight but lighthearted tone. 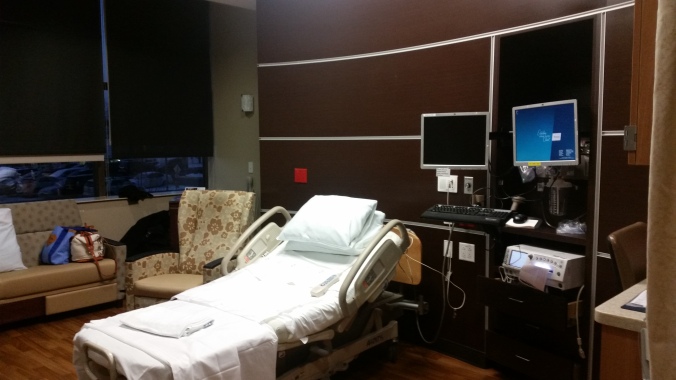 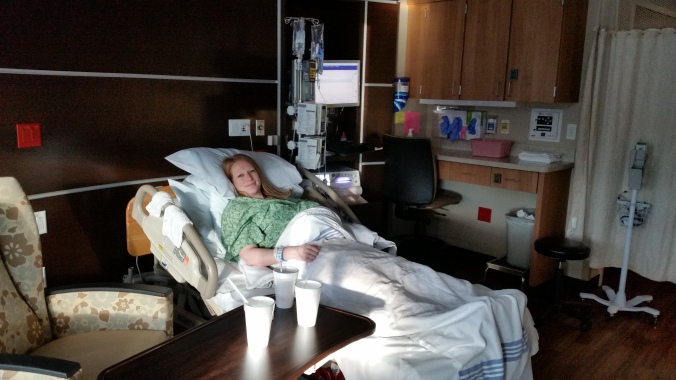 It was about 8:30am by the time they got the IV in and started her on Pitocin to get things moving.

At 9:30am they put in her epidural, which went in smoothly (painfully, but smoothly).

Over the next few hours her contractions steadily grew in intensity.

Just before 2pm they started setting up for the delivery.  She started to push around 2:05pm and the baby was delivered at 2:17pm.  Dr. S quickly held her up and we both announced that it was a baby girl!  NDA was born at 8lbs, 8oz (bigger than we thought) and 21 inches long. 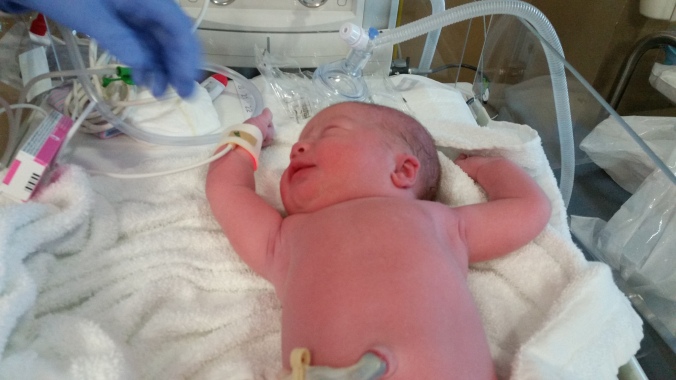 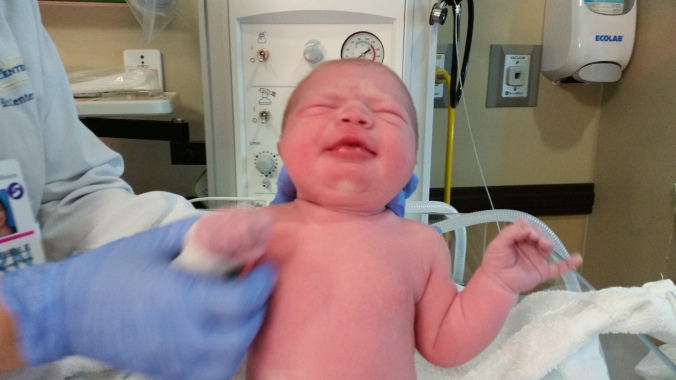 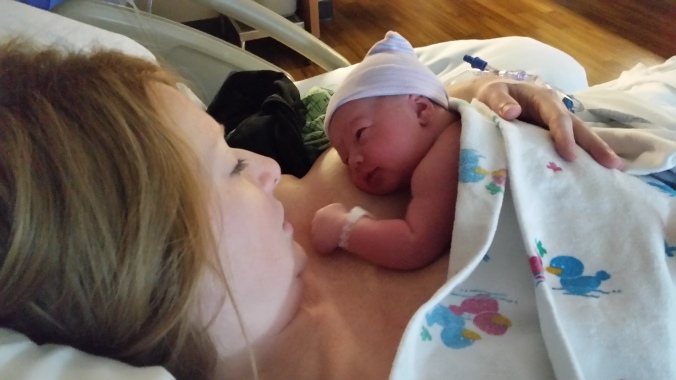 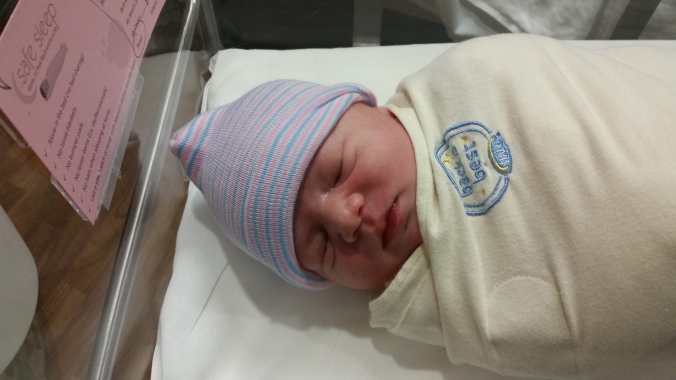 The nurses started to clean her up and got her measurements, shots, etc.  N was working on coughing up some fluid from the birth, but was crying and started to gain her color pretty quickly.

A little before 5:30pm they moved us to the 3rd floor to room 3318 where we would spend the next two days while L recovered.

Nana and Papa  came to visit at that time and brought E with them who was staying at their house throughout all of this.  When E first spotted her she said “baby!”.  She was a little hesitant to get too close to N at first but began to warm up over the time they were there.  A&A also came to visit as well that evening. 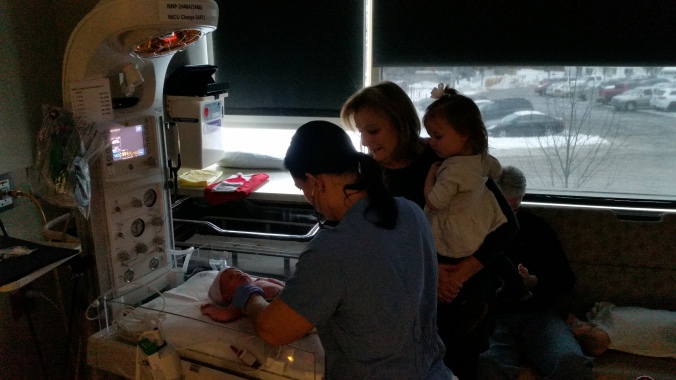 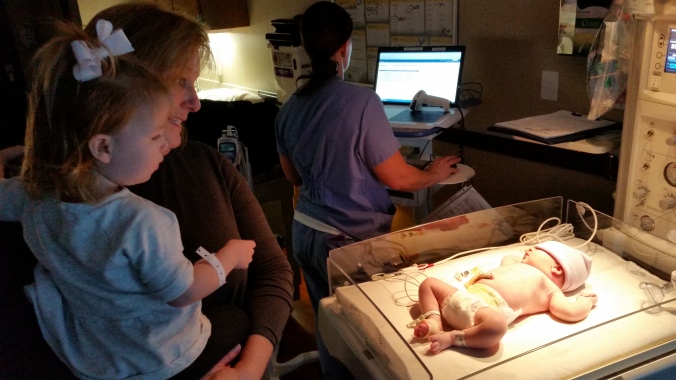 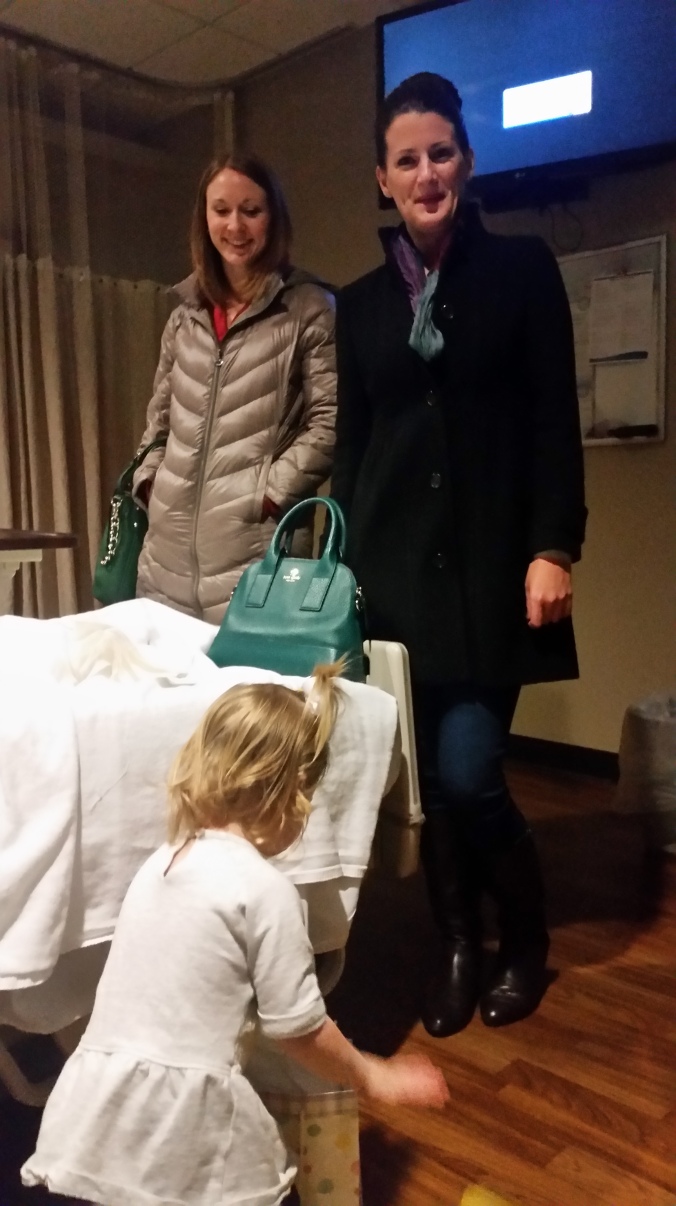 Over the course of the afternoon we noticed N making a purring type sound when she breathed and the nurses said that her breathing looked a bit labored.  She was using her diaphragm quite a bit with each breath.  They kept an eye on her for a while just in our room, but around 7:30pm they decided to take her up to the NICU on the 4th floor for closer observation. 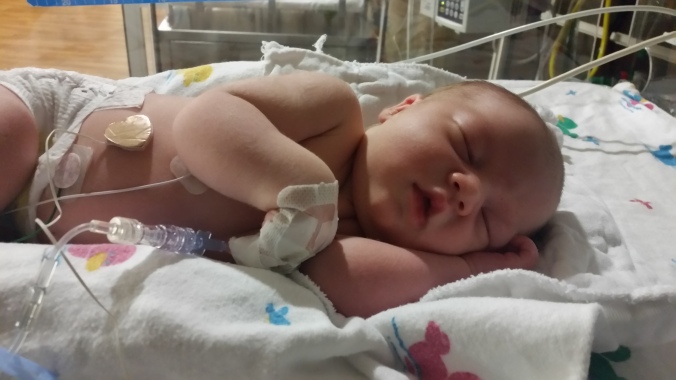 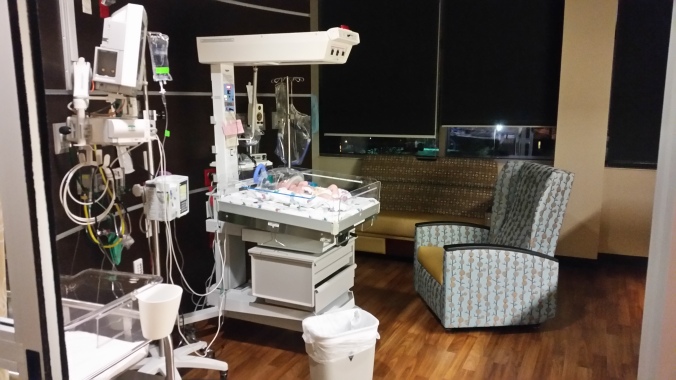 They put her in an oxygen hood,  set her up on an IV,  and monitored her heart rate and oxygen absorption.  The NICU nurses took great care of her.  She was in NICU room 3413 down at the very end of the hall.  Mom watched over her for a good chunk of the night.  Throughout the evening the nurses slowly decreased the oxygen supply that they were giving her to see if she would continue absorbing it as she should.  By approx 6:30am on 12/31 they were able to get her out of the oxygen hood.  She continued to do well so they let dad hold her for about an hour and a half shortly thereafter.  By about 9:00am they allowed mom to feed her for the first time, which went surprisingly well.  They then gave her a full bath for the first time and got her disconnected from the rest of the machines and did their final evaluations.  At around 4:00pm the NICU doctor gave her the all clear and allowed us to bring her back down to the 3rd floor with the well babies and to our room. 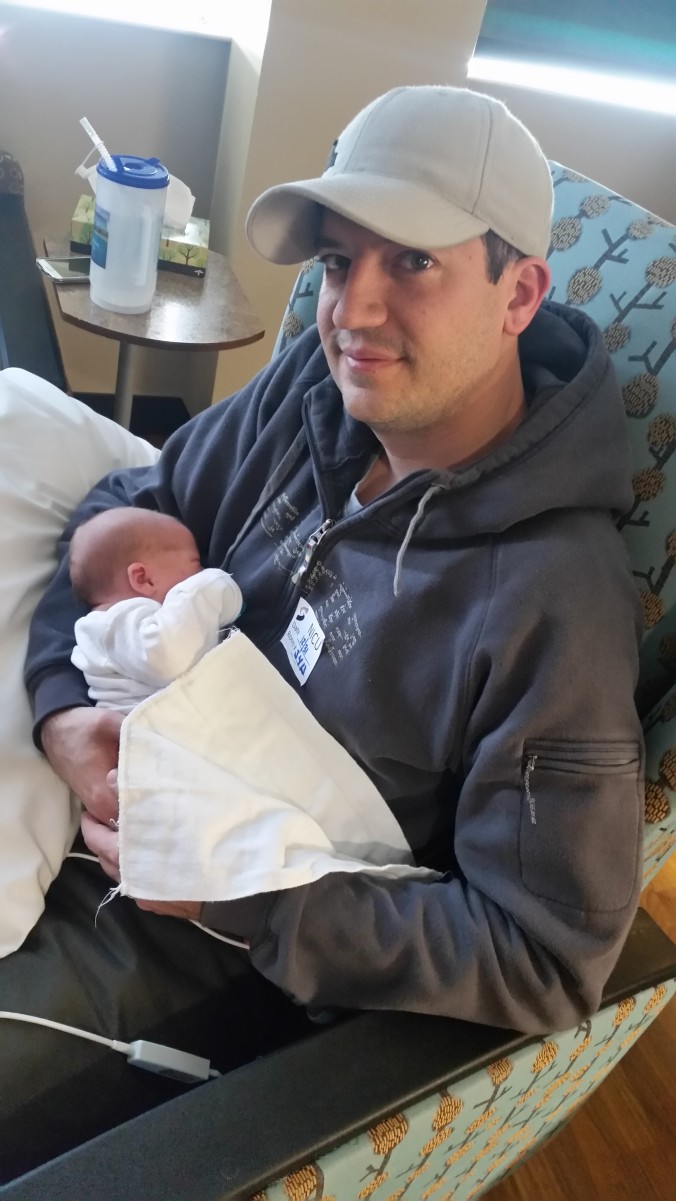 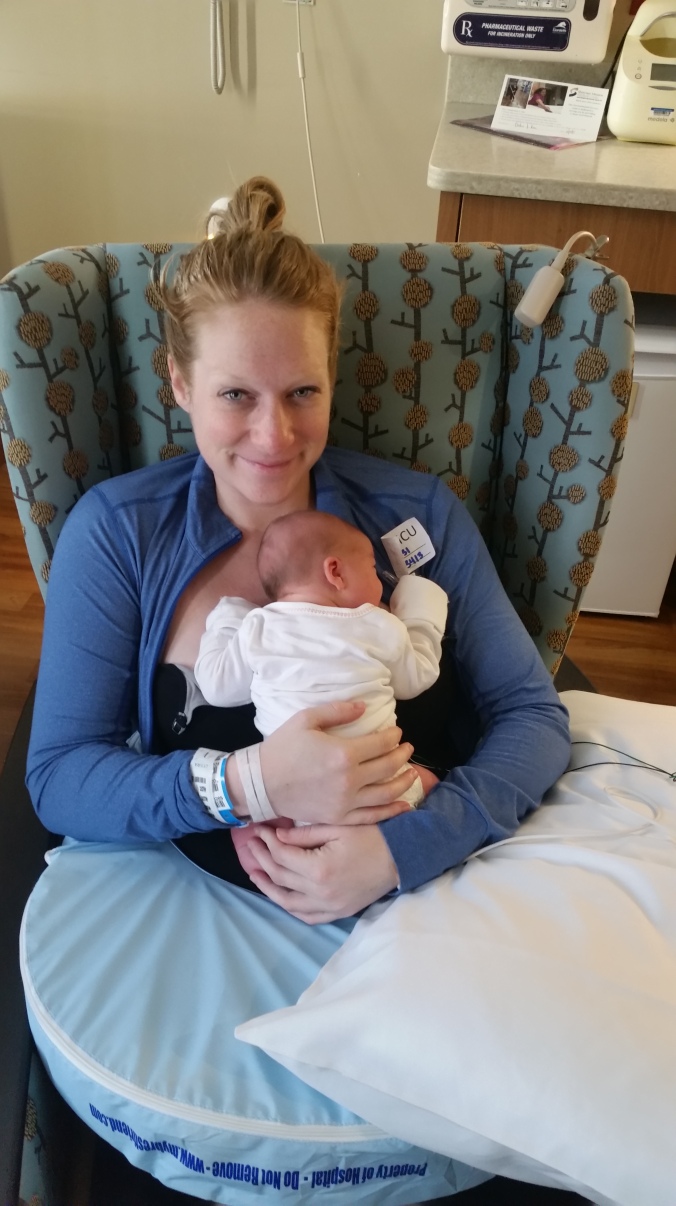 We were able to ring in the New Year together in our room. On January 1st we were dismissed to go home around 3:30 in the afternoon. 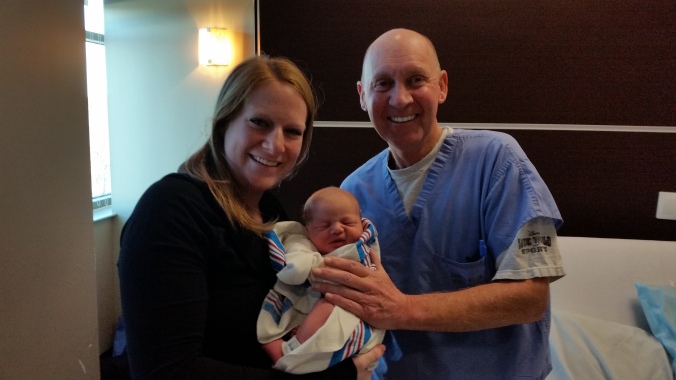 The amazing Dr. S! He delivered both of the girls. 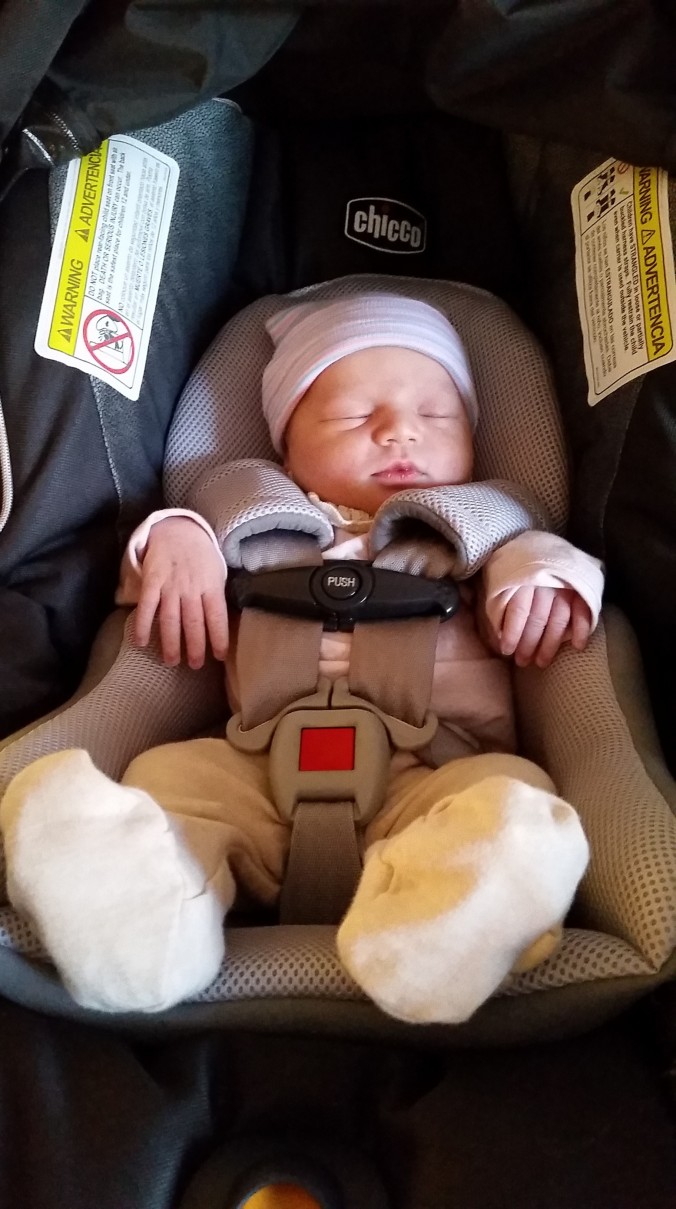 Okay, L again here. I started this pregnancy POSITIVE it was a girl. Well, after a few encounters where others were POSITIVE it was a boy, I decided to shift my thinking. My last guess before baby was here was a boy, so I was surprised when Dr. S held up a girl. I have said all along that I would love for E to have a sister. I think the bond between sisters (although sometimes terrifying) can be such an amazing thing. M and I were both thrilled and M is getting used to saying “my girls”, but we will probably need to get him a boy dog one of these days to get some more testosterone in the house.

Welcome to the world, N! We can’t imagine our lives without you.

Welp. Against my request, Santa brought E one more Christmas as an only child. The due date came and went and we were still yet to meet baby A #2 (more on that later). The good part about my due date being on Christmas is that there was plenty going on to distract me and take my mind off the waiting game. The negative is that I was 9 months (really 10 months) pregnant and pretty dang miserable. I spent the majority of the holiday celebrations sitting down.

Christmas Eve and Christmas morning was spent at our house as a family of three. It was so much fun to see E grasp the joys of Christmas a little more this year. We “made” cookies (okay, okay, they were slice-n-bake. remember the whole 10 months preggo thing?) and set them out for Toonta, which is how E pronounces Santa. The next morning, E loved  seeing her brand new custom made (thanks to Daddy!) coloring table that Santa brought and also tearing in to the wrapped presents. When she first woke up and we told her that “Toonta” had come, she did want to clarify that “Toonta go bye-bye?”. As shown in the Santa blog post, she would much rather Santa stay at a distance.

The amazing table that was crafted by Daddy and delivered by Santa.

And a due date belly pic. Sorry for the blurriness.

After presents were opened at our house, we headed to Nana and Papa’s.

The day after Christmas (still no baby) M’s family came to our house for more food and presents.

Well, we sure did miss you this Christmas, Baby Albright #2, but we will have plenty more to make up for it!